You are here: Home / Health Conditions / Cannabis, Opioids, and Pain: Part One

Opioids, Cannabis, and Pain: Which is Going to Work Best for My Pain?

Pain in general is defined as an unpleasant physical, mental, and emotional experience that is linked to real or anticipated damage to our body or psyche. Ancient evolutionary forces of survival have hard-wired us to respond very quickly to the experience of pain. Did you know that effective pain relief reduces actual healing times of damaged tissues? As such, effective pain control is imperative for our survival and well-being.

This article contrasts two common prescriptions to achieve analgesic effects (i.e., the relief of pain), namely the use of opioids and the use of cannabis or cannabis-containing products.

Now, the answer to the question of what is the best substance to give relief depends entirely on what kind of pain we are dealing with. Effective treatment is determined primarily by addressing the pain’s underlying pathology, that is, the specific mechanisms involved in creating it. For instance, the elements that cause inflammatory pains such as a microbial infection or a minor trauma (with the hallmark symptoms of heat, swelling, and redness) are going to be different from those of nociceptive pain (for instance), where pain is caused by a noxious stimulus (e.g. stepping on a thumb tack) that once removed relatively quickly calms the pain.

So, before we are able to answer the opening question, it helps to break down pain in general into specific types of pain.

Eight Types of Pain and the Choice of: Opioids or Cannabis: What is the evidence?

When I wrote my book on opioids, cannabis, and pain I had the opportunity to review the relevant scientific literature that together produce the scientific basis for making an informed and discerning decision about which type of analgesic is best suited in the treatment of a particular pain. To find out what pain-relief mechanism is optimal for specific types of pain, I first had to collect, categorize, and distinguish the research data according to whether opioids or cannabinoids (compounds found in cannabis) were studied; and second I separated the data by type of pain. In other words, there are different data pools with differing results for inflammatory pain when compared to noxious pain (also known as nociceptive pain).

In their work to understand and determine what analgesic works best for a specific pain, researchers often assign grades for effectiveness ranging between poor and good (with five potential grades: poor, poor-possible, possible, possible-good, and good). When I looked at that data I focused on finding patterns and specific information relevant for all the different patient populations that could benefit from it.

Two very important things stood out early on. One, the only place where opioids get a high grade is in the context of treating acute pains, that is, pains that are usually self-correcting over a period of days or a couple of weeks (e.g. burns, cuts, surgery wounds). Two, cannabis ranked higher in all other types of pains when compared to the use of opioids.

As my research progressed, other significant insights arose.

Opioids contrast with cannabinoids in a number of ways. Most modern pharmaceutical opioids tend to be a single-molecule compound that creates the analgesic effects by intensely targeting a very few G-protein-coupled receptor sites [i.e., mu (μ), delta (δ), and kappa (κ)] that tend to concentrate in the central nervous system, where they affect cognition and mood, and in the gastrointestinal tract. This fairly narrow and focused impact of opioids is responsible for their effectiveness in the treatment of acute pains. However, it is also responsible for the high addiction potential, high risk of adverse effects including over doses, and of course overdose- related fatalities.

In contrast, complete cannabis (full-spectrum plant material) is a polypharmacological gift of nature that interacts with a much more complex network of receptor sites in the human body than that employed by opioids, which is likely the reason why it is so much safer and why it works so well for all types of pain with the exception of acute pain. The following graphic shows all of the currently known receptor sites or mechanisms by which the key cannabinoids (THC, CBD), endocannabinoids (e.g. anandamide, produced within the human body), and a couple of other plant-based compounds (e.g. echinacea, beta-caryophyllene) bind with endocannabinoid receptor sites to produce analgesic effects.

Endocannabinoids: those made by the human body; endo- meaning “within.”

Graphic 2: Known pathways or mechanisms by which the endocannabinoid system produces analgesic effects.

Cannabis-based analgesia is realized not just through the classical endocannabinoid receptors CB1 and CB2 (the first ones discovered and also the most active) but also via other G-protein- coupled receptor sites (GPR’s) (i.e., 3, 18, 55). Additional analgesia-producing pathways are produced via nuclear receptor proteins called peroxisome proliferator-activated receptors or for short, PPAR’s (pronounced peepars); via ionic cannabinoid receptors aka transient receptor potential (TRP) channels (pronounced trips); via activation of various neurotransmitters activation through (+ or -) allosteric mechanisms; and finally by enzymatic pathways of endocannabinoid degradation that increase the bioavailability of anandamide, the human body’s own endocannabinoid possessing analgesic and even euphoric properties (think runner’s high, or Rocky Mountain high).

Fun fact: You may notice in Graphic 2 that I included echinacea, a non-cannabinoid herb with pain-relief benefits. It binds with CB2 at about half the strength of THC at the same receptor site. The point is that supplementing with echinacea (available as a tincture) to treat especially inflammatory pain may be an additional and relatively inexpensive synergistic option.

Which type of cannabis can provide effective analgesia without the “high” and why is that important?

Before we answer the first question, let’s look at the second one—why is having the option to benefit from cannabis without getting high so important? Allow me to use a couple of examples to ground this medical information in a more practical manner. Children with conditions such as epilepsy can benefit from cannabis as medicine for preventing seizures, and this group needs to avoid psychotropic effects for obvious reasons—they are children! At the other end of life, seniors represent one of the largest group of patients new to cannabis, and one of the most common reasons seniors visit the doctor’s office is for the treatment of various types of pain.

Pain is never just a purely physical sensation. It always has a psychological (mind-body) component to it, which can, in fact, be harnessed to produce the most effective cannabinoid-based analgesia possible. Consider this: studies have shown that when people are fearful, their pain threshold goes down; in other words, their sensitivity to pain increases. The opposite is true for when people feel safe and secure—their pain threshold goes up and their sensitivity to pain decreases.

Sadly, many members of older generations have been misinformed by the narrative accompanying the war on drugs.  More often than not they come to the doctor’s office with a mental architecture filled with fear and worries about the “evil weed from Mexico.” However, once seniors learn that they have some agency over what kind of cannabis experience they wish to have, any previous concerns about using cannabis or cannabis-containing products can be reduced. With this agency or choice, patients are empowered and practically supported, which in turn counters any anxiety and as such will fortify effective analgesia.

Now let us look at what type of cannabis can contribute to effective pain relief (for virtually all types of pain) without changes in cognition or getting “high.” The type of cannabis I am referring to here has nothing to do with the common industry distinction of sativa and indica (different cannabis species’ Latin names) to which assumed medicinal properties are attributed in generalized claims that are not evidence-based, and which are subject to change between grow cycles. Such descriptions as “sativas get you high and indicas relax and slow you down” are woefully unreliable and imprecise.

Consider this: Two people use the same identical seeds or clones to grow a specific cannabis species—but even subtle differences in their growing environments can significantly change the chemical composition of all plant constituents. Environmental (epigenetic) signals such as temperature, nutrition, and quality of light will initiate specific changes in genetic expressions without changing the plant’s genome or DNA. As such, even though the two cannabis species are genetically identical, the therapeutic (or adverse) effects they engender could be as different as mixing up a Zoloft with a Vicodin. Furthermore, none of the assumed qualities are evidence-based, making any success you may have had a good guess at best, further complicating consistently repeatable results. (The ability to repeat results is a hallmark of effective therapy.) While using the old (sativa vs. indica) system may still have value in the general context of breeding cannabis strains or as a means to discuss terpene profiles, for example, relying on it in a medical context makes it nearly impossible to use the abundance of available scientific literature to align the sativa/indica distinctions with the needs of specific patient populations that require a specific set of cannabis constituents, in as precise a ratio as possible of its prime cannabinoids tetrahydrocannabinol (THC) and cannabidiol (CBD).

An updated newer, scientifically informed system is becoming increasingly accessible and useful. It addresses all the shortcomings of the old one. As the last four decades of research discovered, three basic numbers form the key to predicting specific therapeutic effects (e.g. effective analgesia) for any type of cannabis plant, though these values are not the only variables. These key numbers are: one, the amount of the primary psychoactive cannabis constituent THC; two, the amount of the non-psychoactive cannabis constituent CBD; and three, the ratio of THC to CBD. It is these three factors, as expressed by two percentages and a ratio, that allow us to discern three basic types of cannabis, identified by the Roman numerals I, II, and III and called cannabis chemotypes. A chemotype I contains more THC than CBD. A chemotype II contains relatively equal amounts of THC and CBD. And, finally, a chemotype III contains more CBD than THC. 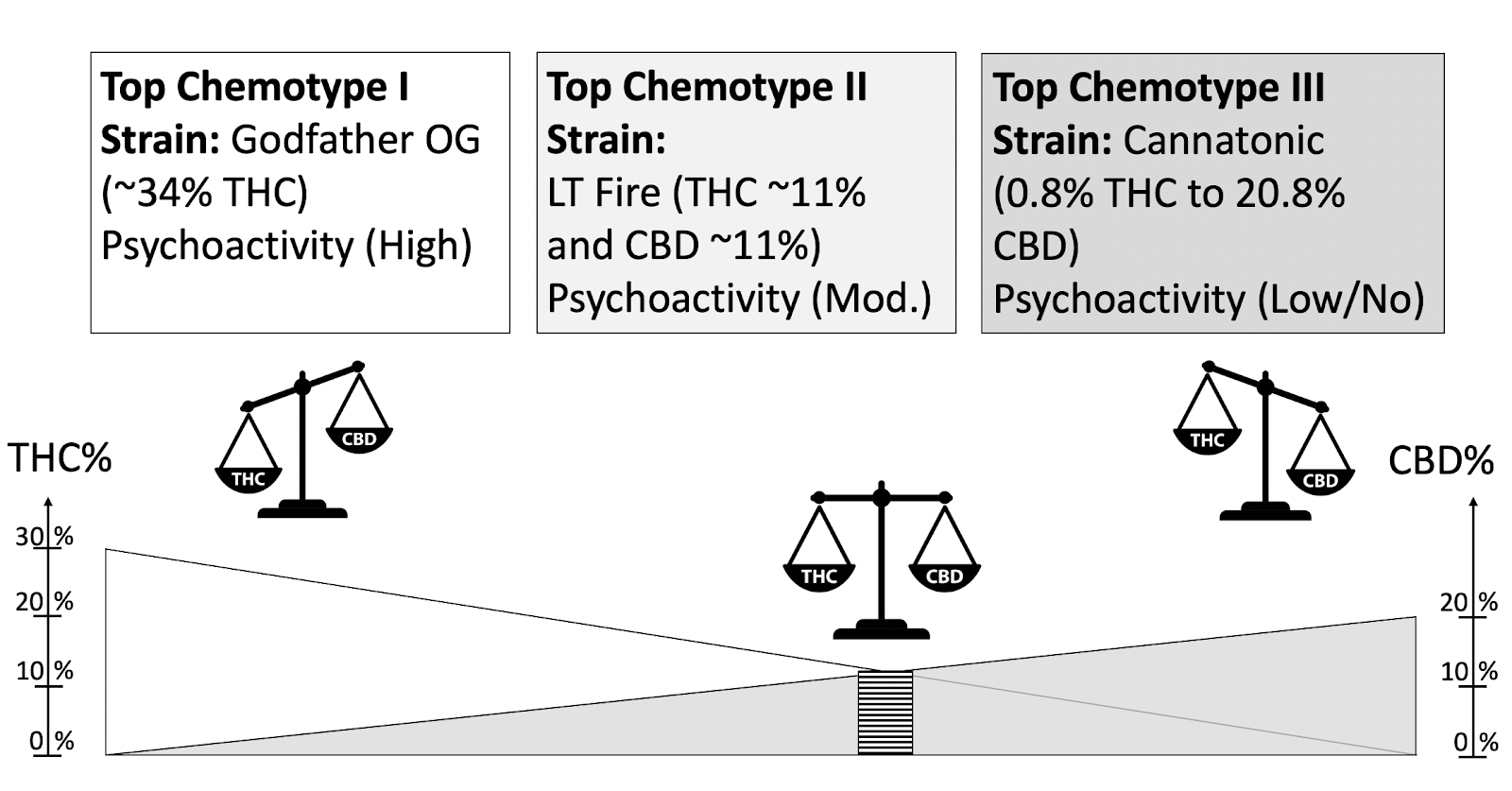 Graphic 3: Chemotypes of cannabis: A type 1 has THC>CBD, a type II has THC=CBD, and a type III has THC<CBD.

Understanding cannabis chemotypes facilitates an evidence-based approach to prescribing cannabis that in turn will produce consistent and precise effects sought after by so many different patient populations, especially those with chronic conditions for which there is no cure within orthodox medicine.

And, now let’s answer the question about which type of cannabis can produce effective analgesia without changes in cognition. As you might have guessed by now, a cannabis chemotype III such as Cannatonic (0.8%THC:~21%CBD) or Charlotte’s Web (0.5%THC:17%CBD) can provide effective analgesia without the “high,” all the while giving the patient agency over the kind of cannabis experience desired. In doing so, the experience of agency can undo much of the damage done by decades of negative belief-building by anti-cannabis propaganda and the war on drugs’ misinformation campaign that still keeps a great number of patients from what otherwise could be an effective analgesic.

For those who are curious about the specific pathways or mechanisms by which a cannabis chemotype III produces effective analgesia, look back to the Vitruvian Man in Graphic 2 and see what happens when you cross out all the blue dots representing THC. What you will notice is that all pain-reducing mechanisms are still in place, with the exception of GPR18. As such, the vast majority of the known and complex mechanism by which cannabis produces pain relief is still at work and ready to be employed, awaiting but your invitation.

And so, to summarize:

This blog article is based on research conducted for my book Breaking the Cycle of Opioid Addiction: Supplement Your Pain Management with Cannabis, published in 2018 by North Atlantic Books in Berkeley, California. For those of you interested more specific details or the scientific basis for the topics discussed in this article, the book provides in-depth and extensively annotated information.